skip to main | skip to sidebar

Embrace Southern Chicken & Dumplins And They'll Hug You Back!


My name is Deborah and I love to cook. I've been blessed to have a few dear friends and family members who were patient enough to teach me how to cook. Let me preface that by saying that when I was 20 years old and a brand new wife, I could read recipes and feed myself and my husband with a minimum degree of success about 50% of the time. {That means, we ate, but it wasn't really good most of the time. Unless I baked. One can live on cookies and cake, right?} I could make breakfast and anything a la box food, and whatever I had a simple recipe for. We ate tuna casserole so much that I vowed never to cook that again.  {Not that there's anything WRONG with that, per se.} Nineteen years, four kids, a divorce and remarriage later--not necessarily in that order, I finally have accrued a nice bit of skill in the kitchen, for which cooking television and very patient friends are at least 80% responsible. 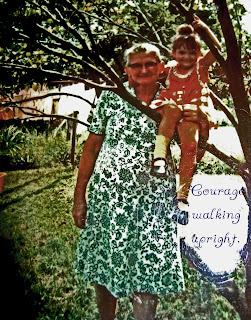 Anyhow, Monday, I had a date with destiny. I prayed to the cooking gods, begging for the guidance of my sweet grandma and my dearest departed friend, and held my breath {but only for a few minutes--passing out is no fun} and attempted for the very first time an old Southern standard: chicken and dumplins. {That's how we say it in the South. Yes, I know most people say dumpLING. Bless their hearts.} I am almost 40 years old. I have missed my grandmother's chicken and dumplins for 27 years. Twenty-seven years is far too long to fear a recipe, of all things. Truly, in my mind, it wasn't just a recipe. It was the nostalgia of the woman who has inspired me for most of my life, who could cook Southern comfort food in her sleep if she'd wanted to do so. It was my intense desire to honor her and do due diligence to her legacy. It was time for me to be a Brave Girl about it all. Thank you, Grandma. I love you!

We just endured our first hurricane watch as a family recently, and the weather has been rainy and cool since. After a surprisingly strong, but not epic, earthquake followed by a hurricane {which, for us, was really a tropical storm}, I made the executive decision to make comfort food instead of traditional Labor Day picnic fare. I dove right in and began my lessons in the art of making dumplins, but I was completely intimidated.  "It's just flour and milk!" you say, "What's so difficult about that?" You must understand that NO one messes with the hallowed favorite recipes from their grandmother's kitchen. I just didn't want to mess it up. Also, I never actually was given her recipe. So, I went about an internet search and found a photo that looked like hers did and tweaked the basic instructions attached. It took me at least 10 years to learn how to make my own chicken stock. Well, in truth, it didn't take me that long to learn it, but it certainly took me that long to WANT to learn. I feel as if a rite of passage has just transpired in my life. It's exhilarating and humbling all at once.

Here's how I went about the process. I probably should've begun with a few minutes of Yoga, because I was so ridiculously nervous about it all. But my first move was to gather my ingredients for the stock. Those who aren't new to cooking already know that when you cook with incredibly fresh and unprocessed ingredients, your food is like magic. It took me years to figure this out. Trust me on this one, it's true. 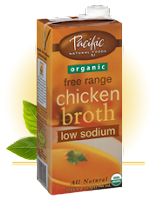 Stock isn't difficult, really. Making good stock is really all about how well you season the ingredients before you cook them and making sure that your heat is never higher than medium [a low simmer]. My not so secret weapon is that I never just use water to cover the meat and veggies. I always, always use a pre-made broth. It just makes life easier and the recipe that much more flavorful.

Alright, now that we've gathered the ingredients, grab a really large stock pot and add 4 roughly chopped large carrots and celery stalks. I cut them in thirds. Typically, this amount of vegetables nearly covers the bottom layer of the pot. Sprinkle the veggies evenly with salt and pepper. Add your cut chicken pieces to the pan after you've salted and peppered both sides of each piece generously. Your chicken should look like you evenly sprinkled every surface. You can buy a whole bird and cut it yourself, or ask the butcher to cut it for you. OR if you don't have a real butcher in your grocery store (sad reality, but true in many places), you can find a pre-cut whole bird and just skip right out to your car. Just be careful not to drop your chicken. That would be bad. **This is the part of the story where my brain remembers hearing stories of my grandmother wringing the neck and decapitating her chickens before she plucked and butchered them herself. I'm so proud of her for having that level of ferocious skill, but I'm so glad I do not have to go to those lengths today.

This is the point that most stock recipes will tell you to cover with water. This is where I use three 32 ounce organic boxes of broth and cover the pot with its lid.  It is okay to walk away for a couple of hours while your chicken stock simmers. The chicken is beginning to fall off the bone when you fork test [fork test- poke with fork. very technical term.] between an hour and a half to two hours of cooking. (If you're cooking on a gas stove, it may not take quite that long.)

When you see particularly the breast bone gently pulling away from the meat, it is time to turn off the burner and use a colander and large bowl to strain the broth from the meat and veggies.  Once you strain the broth out, put it back in the pot and adjust your heat to low while you mix the dumplin batter. Taste the broth to check for seasoning. It should be a bit saltier than the end product. If it isn't salty enough, add more by 1/2 a teaspoon until it tastes like you want it. During this time, your chicken needs to cool so that you can handle it later to discard the skin and bones. 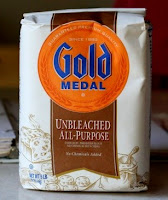 For the dumplins, my ingredients were flour and milk. That's all. No leavening was used this time. I've seen recipes with salt. I've seen recipes with baking soda. Not this one. Not this time. Two cups of all-purpose flour (I feel really sorry for you gluten-free folks. I don't know if there is a way to make this recipe without gluten.) along with 2/3 of a cup of milk and just a splash more. Mix these together until a single ball forms. It will be sticky, so as you remove the dough, make sure you have sprinkled a bit of flour on your hands and on the dough. I like to roll the dough about in the mixing bowl coating it with a bit of flour before I take it out. 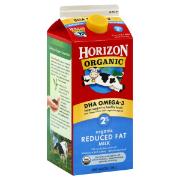 I have no idea why I use Gold Medal flour, but I always have, except for one time I tried another brand and just twitched the entire time. Use your favorite. Whatever helps you relax, really.  Also, I'm particular about milk. Some milk just ain't good, y'all. This stuff, however, rocks my world. I've accepted the fact that I'm a little discriminating about food products. 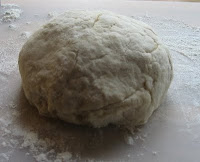 Your dough should look like this. I typically lay out wax paper or parchment (whatever I have on hand) and sprinkle some flour on that before I plop the dough down to roll it out. It's a good idea to walk away for about 5 minutes and let the gluten in the dough relax so your dumplins will be tender. Turn the heat of your stock up to medium and get a small rolling boil working. Knead the dough a couple of times to loosen it up. Then put it back into a ball and get ready to roll it out. Don't forget to rub flour on your rolling pin so it doesn't stick. Once your dough is rolled out, it should be 1/8 inch. How many people measure dough thickness with a ruler? Not me, but it can be done if you feel particularly precise. It should look like THIN pizza dough when it's ready to cut. Use a pizza cutter or sharp knife to cut 1/4 inch wide strips. Dumplins should be no longer than your index finger. If they're too long or wide, they take much longer to cook and become tender. Cook time will depend entirely on how many dumplins you cook. I did a double batch and it took them about 30-40 minutes. When they are done, the ends should be slightly translucent. Mine weren't translucent because I didn't quite roll them thin enough, but they were still really delicious. When you determine your dumplins are finished cooking, sprinkle a tablespoon of flour and 1/3 cup of milk into the pot and stir. You'll see your stock turn into more of a gravy or light sauce. 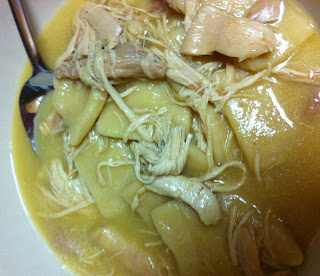 While your dumplins cook, you should begin to remove the bone and skin and connective tissue from the chicken. Take your time doing this step so the texture of the chicken remains moist and not mushy. A lot of people nowadays don't know how to debone a bird. It's time consuming, but the more you practice, the faster it will go. Be sure that the meat you separate out is just that and tear it apart into just larger than bite-sized chunks. When your noodles are almost ready, put the chicken back in the pot and stir gently. Here's how mine looked. The dumplins should be fairly limp and lazy looking. Mine are just a tad too thick for that, but Oh. My. Heavens. So very good. I challenge you all to make this dish. Some of you will probably do it FAR better than I did, but for a first attempt, I was quite pleased. What a great way to kick off Autumn! Good luck and be brave!

**EDIT: I totally forgot to mention something sorta pivotal. I used a Kitchenaid Stand Mixer to make the dough. It can be done with a wooden spoon and your arm, but it takes a lot longer. Anyway. I'm a thorough girl and hate leaving out steps. Recipes with missing steps can result in disaster. Also, I'm trying to figure out how to put a link thingy in here with just the measurements and boring ol' recipe for printing. It'll be available ASAP.

Posted by Domestic Empress by Design

I, too, am intimidated by chicken and dumplins! I have never dared to try...but you have inspired me to entertain the thought! I'll let you know if/when I get brave and give it a go... :-)

Congrats on the your new beginning (blog)!!

I will definitely try making these sometime! I could be wrong, but I think that making gluten free noodles would be pretty simple! And require less mixing and kneading since you don't have any gluten to activate! We'll see... It looks SO DELICIOUS!!!

Recipes are sou much more interesting when you share why they are special to you! Loved hearing about your Grandma!